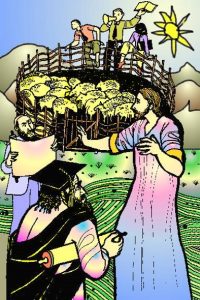 JESUS IS THE GATE

Jesus proposes to a group of Pharisees a metaphorical story in which he harshly criticizes the religious leaders of Israel. The scene is taken from pastoral life. The flock is gathered within a sheepfold, surrounded by a stockade or small wall, while a guard watches over the entrance. Jesus focuses his attention precisely on that «gate» that allows someone to get to the sheep.

There are two ways to enter the sheepfold. It all depends on what one tries to do with the flock. If someone comes close to the sheepfold and «doesn’t enter through the gate», but rather climbs «in some other way», it’s evident that it isn’t the shepherd. He doesn’t come to take care of the flock. He’s «a stranger» who comes to «steal, kill and destroy».

The action of a true shepherd is something very different. When he comes near the flock, «he enters through the gate», goes around calling the sheep by their name and they pay attention to his voice. He leads them out and when he’s reunited them all, he puts himself in front of them and goes walking ahead of them toward the pastures where they can eat. The sheep follow him because they recognize his voice.

What secret is contained in that «gate» that legitimizes the true shepherds who pass through it and unmasks the strangers who enter «by another way», not to take care of the flock, but to destroy it? The Pharisees don’t understand that this Master is talking about them.

Therefore, Jesus gives them the key to the story: «In all truth I tell you, I am the gate of the sheepfold». Whoever enters through the path opened by Jesus and follows him, living out his Gospel, these are the true shepherds: they will know how to nourish the Christian community. Whoever enters the sheepfold leaving Jesus to one side and ignoring his cause, are alien shepherds: they will do damage to the Christian people.

In not a few Churches all of us are suffering greatly: both the pastors and the people of God. The relationship between the hierarchy and the Christian people is frequently lived out in a way that is suspicious, tense and conflictive: there are bishops who feel rejected; there are Christian sectors who feel marginalized.

It would be all too easy to attribute all this to an abusive authoritarianism of the hierarchy or to the unacceptable rebelliousness of the faithful. The root is deeper and more complicated. We have created among all a difficult situation. We’ve lost peace. We’re going to need Jesus more each day.

We need to make grow among us mutual respect and communication, dialogue and the sincere seeking of Gospel truth. We need to breathe right now a more friendly climate in the church. We won’t get out of this crisis if all of us don’t return to Jesus’ spirit. He is «the gate».